source：城市围棋联赛 author：佚名 time：2019-06-24 15:24:15 0hits
The front page of Guangxi Daily | Marching towards the First-class International Competition
Editor's Note: In 2019, the continuous innovation of the City Weiqi League in the competition system and business model has made Weiqi have a new charm and show strong vitality. The influence of the event in the world is getting stronger and stronger, and it has become an important carrier and platform for Chinese culture to go out and sports communication. On the 28th of May, the front page of Guangxi Daily published an article, praising the City Weiqi League to march toward the world's first-class competition. Reprinted as follows: 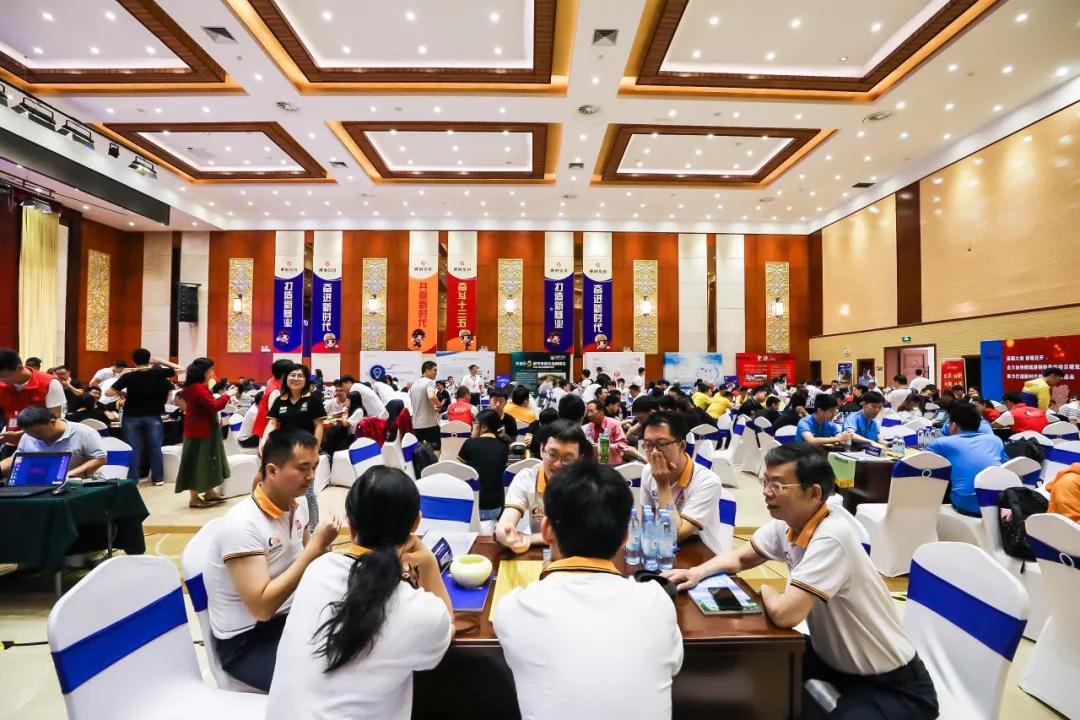 ▲On the morning of May 25, the 2019 season City Weiqi League started at the Liugang Conference Center. The picture shows the game scene. Li Weitang / photo

Guangxi Daily reporter Jiang Shiyuan, correspondent Lin Fei
On May 25th, the opening game of the City Weiqi League 2019 season (hereinafter referred to as “CWL”) was held in Liuzhou. The coaches and players from 32 city clubs in 8 countries on four continents walked into the Liuzhou Iron and Steel Group together with the famous masters, business elites and fans, and performed an unprecedented grand Weiqi Entering Corporate activities.
This is another pioneering work of CWL in the process of running the competition.
The fifth CWL season’s debut gave people new joy and new expectations. This original self-owned brand event in Guangxi is steadily moving towards the whole country and towards the world, making great strides toward the goal of “building the NBA in the Weiqi field” and becoming a top international event.
Grand Scale, Masters Gathered

On the morning of the 25th, in the Liugang Conference Center, the 32 cities clubs’ players started the fighting.
In addition to the familiar figures of many Chinese world champions, a new face has attracted the attention of fans. He is the first time to participate in the CWL’s first European and American professional Nine-Dan, American Weiqi player Micheal Redmond. Redmond’s Los Angeles Club is one of the three new clubs joined this season. The players in the line include Wang Licheng, who has the three titles of “Japanese Go Saint”, “Ten-Dan” and “Throne”, and the youngest Go Saint in Japanese Xu Jiayuan and the American Go Open champion Lin Xuefen and others have good strength.
Since the 2016 season, CWL has been joining foreign clubs and it has become more and more internationalization. This year, the Osaka Club appointed players all are Japanese led by Yuki Satoshi, and the Paris Club introduced two French players and a Romanian player this year. However, compared with some domestic clubs that have the strength to compete for titles, these foreign clubs still have a certain gap. After three rounds of fighting, the Osaka team lost in the three battles, the Paris team was 1 win and 2 losses, and the Los Angeles team was 2 wins and 1 loss.
Among the 32 teams, only Beihai, Shanghai, Nanjing and Guangzhou teams were unbeaten. The Ningbo team with three world champions Guli, Tanxiao and Piao Wenyao only won 2 wins and 1 loss. CWL tournament presents a trend of contending for hegemony.
According to statistics, in the 2019 season, there were 21 Nine-Dan players attending CWL, more than 70 players are Six-Dan, more than 60 players are amateur Six-Dan, and up to 14 players who won the World Weiqi Championship. . This is evident that CWL is a high level competition.

CWL can attract so many high-level players, and it has related with its innovative game system.
The group relay system initiated by CWL has changed the Weiqi game from individual (single intelligence) to group (jizhi) game, use the form that multiple players play one same game, and introduced substitution, suspension and other rules, in which the event is interspersed with Weiqi Girls elements, famous masters commentary and other interactive elements, give modern elements to the old Weiqi game, let Weiqi rejuvenate vitality, and fans are more interested on the game.

Wang Runan, former chairman of the China Weiqi Association, commented: "CWL is a great innovation in our Weiqi field." Weiqi Saint Nie Weiping believes that CWL is a banner for the reform and opening up of Chinese Weiqi.
Chinese American Zhang Nanxuan, the Captain of the Los Angeles club, said that CWL provided a new direction for Weiqi activities and had an epoch-making significance.

With the competition as the core, CWL has gathered the power of clubs shareholders, investors and various parties to transform the whole season activities into a platform for economic and trade exchanges, use the social forces to hold the tournament, form a business ecosystem that hundreds of companies have participated in and their annual business income is over 100 billion Yuan.
In 2015, CWL was born in Nanning. At the beginning of its establishment, CWL took the initiative to choose a new path different from the traditional Weiqi game.

It used the brand-new model of “self-development to cultivate endogenous power, social capital to join, professional companies to run market and events”, and created a precedent that investors independently operate commercial (professional) events under the direction of the Project Association.
CWL used the standardization and specialization to create the event operation team. Through the hosting of the 2018 Chinese Weiqi Congress, and it held opening games in Liuzhou for two consecutive seasons, forming a successful example of co-organizing large-scale events with government departments and large enterprises. The “Civilian-Run and State-Subsidized” model has won praises from all parties.

According to statistics, more than 30,000 people has participated in CWL’s each season, which has led to more than 300 million Yuan in consumption, including exhibition, consulting, catering, transportation, accommodation, tourism and shopping, etc.

Du Ying, the former Counselor of the State Council and the former deputy director of the National Development and Reform Commission, said: "In the past, traditional Weiqi games basically relied on government subsidies or corporate sponsorships. CWL developed Weiqi to popularization and marketization. CWL has created a pattern of capital operation and diversification allows social capital to participate and achieve sustainable development."

Cultural Diffusion, International Influence
With the join of the Los Angeles Club, the geographical map of CWL has been further expanded, and it has covered 8 countries on 4 continents in Asia, Europe, America and Oceania.

The influence of CWL was spread through the event and applied to the overseas home events: there are a number of events in Shizuoka Prefecture, Japan, which are used in this game system, Toronto, Sydney Weiqi Open Game, Weiqi Culture Festival to promote the relay race; Bangkok home game was held in the Thai Chia Tai Group, attracting local wealthy businessmen to be the Weiqi platform; Andrew Oken, president of the American Go Association, is looking forward to holding a CWL competition in the US city in the future, so that the American people can pay attention to Weiqi and let American Weiqi fans participate. Both the Sydney Union Club and the Toronto Lijia Lihua Club have expressed the hope that the new season will be able to promote traditional Chinese culture through home events.

Lin Jianchao, chairman of the Chinese Weiqi Association, said in the opening ceremony of Liuzhou that the five years of the storms of CWL proved that the intelligent gathering game system adopted by them is in line with the essence of Weiqi--making people's spirits happy, thus making Weiqi posses a new charm, shows its strong vitality. "(Liuzhou) opening game is a microcosm, a concentrated expression of the development of CWL around the world."

Hundreds of crickets contend, and those who fought are first. CWL pursues the new game in the identity of the sports industry explorer and the Chinese cultural communicator, bravely embarked on the road of innovation and development, and won praises from all parties. “CWL is the explorer of the road of industrialization of Weiqi”, “CWL has created a new sample of sports industry development." The influence of CWL has expanded from the Weiqi world to all sectors of society. The influence of the event has spread all over the world and has become an important carrier and platform for Chinese culture to go out and sports communication.


With the posture of being sentimental, capable, responsible and willing to work hard, CWL is becoming a business card with a certain international influence on Guangxi cultural sports and Chinese culture.
Qin Hongbing, the head of the event organizer Huazhi City Weiqi League Sports Industry Co., said that in the new season, more overseas home games will be arranged, cruise events, national city events along the “Belt and Road” will be held to further promote the Weiqi culture and allow a wider participation degree of the league, a higher degree of attention, a greater influence, a richer connotation, and its extension is extended more, becoming an internationally renowned event.